The Future of Journalism: Who will pay??

So, we’ve heard it before and we’ll hear it again and again; traditional journalism as a form of media is on its way out.

As people continue to demand for information to be delivered to them more and more quickly technological advancements are allowing for journalists to tell their stories in more and more ways. But the question is: while print publications are loosing their audiences and advertising revenue to the Internet, how will ‘quality’ journalism survive? Who will pay for this ‘quality’ journalism?

The main idea? Audiences will have to pay for online news content if they want quality information.

Rupert Murdoch’s alleged plans to persuade newspaper readers to pay for online content, could determine a lot for the future of journalism. But would Australians really pay for journalism?

7 out of 10 Australians say NO, they will not pay for online news content. Obviously this was a small group of people surveyed, but still, the results are alarming for Murdoch.

This is because people expect online content will be 'free'. 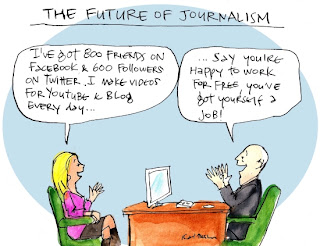 Photo courtesy of The Walkley Foundation

So the question is: will audiences pay for this "independent, credible media"? When you're buying a print publication are you just paying for the medium, the labor and printing costs? Or are you paying for the words? This question will determine whether people will be willing to pay for online content. Journalists need to be inventive and find a way to deliver traditional and 'quality' journalism in a more attractive and valuable way.

For example, The Age and The Sydney Morning Herald have introduced their new iPad Applications where the version for the iPad mirrors that of the print version. This is where we need to be headed. Online content has devalued the journalist. However, Jay Rosen believes what journalism was, what it could be and what it should be are all ideas that are still up for grabs...


We are leading to the reinvention of journalism and with more ways to generate revenue than ever we need to be exploring what audiences are willing to pay for and embracing and adapting to this new technological age. If not, quality journalism may in fact die.

Kyla Banks
I am in my final year studying a Bachelor of Communication at the University of Newcastle. I am majoring in Public Relations and Journalism.